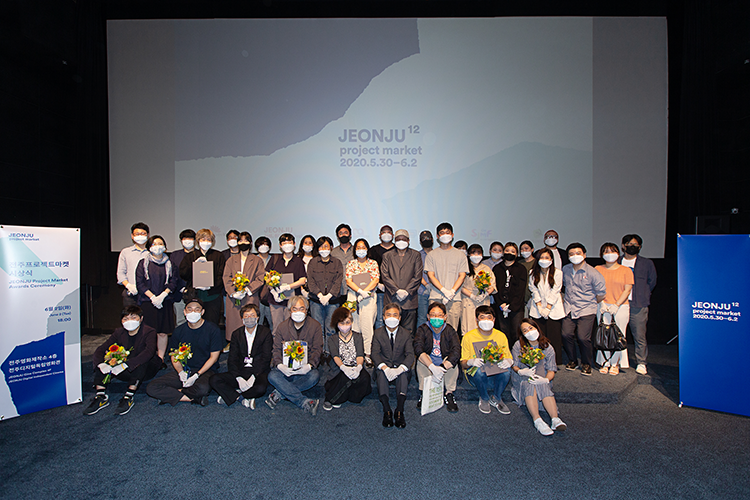 ▲ The Award Ceremony of the 12th JEONJU Project Market

The JEONJU Cinema Fund, which supports domestic projects, selected director and producer PARK Hyuckjee’s My Genie as the Korean title for JEONJU Cinema Project 2021. My Genie is a documentary that follows Soojin’s trajectory of life. Soojin is a young girl who must accept her fate to become a shaman, and she faces challenges that break her down and make her adapt. This project is by director PARK Hyuckjee who debuted with With or Without You (2015), another JEONJU Cinema Fund film that was screened at 16th JEONJU IFF’s Korean Competition.

JEONJU Next Edition which supports international projects selected director and producer Eric BAUDELAIRE’s A Flower In the Mouth as a JEONJU Cinema Project 2021 title. This project contains the fundamental question of “What to do in the passing time.” The project will unfold as a hybrid between documentary and narrative film based on Luigi PIRANDELLO's play The Man with the Flower in His Mouth (1922).

The above projects will receive up to KRW 100 million in development funding, and once they’re complete, the films will screen at the JEONJU IFF as world premieres to meet with the audience.

The second project development grant of KRW 43 million, supported by the JEONJU Cinema Fund, went to director KIM Yoon-zy’s narrative film Remain, and director KIM Jeongkeun’s documentary My class (working title). The JICA Award for sound mastering is supported by the Jeonju Information & Culture Industry Promotion Agency. This award was given to KANGYU Garam’s narrative project Lucky, apartment (working title), and NAM Arum’s documentary project Patriot girl. The Furmo DT Award which gives support to projects submitting their films to international film festivals was given to documentary Shaping Trout by HEO Seong, while the JEONJU Cine Complex Award for digital color grading and DCP was awarded to The protector by KANG Kyungtae and Shaping Trout by HEO Seong.

RoughCut Navigating, a part of the K-DOC CLASS project which is co-sponsored by the SJM Foundation, EBS International Documentary Film Festival (EIDF), and JEONJU IFF, is a support program for Korean documentary projects which was introduced for the first time this year. Out of the 5 finalists, 3 titles received the honor of winning. Director KIM Jung-in’s A long way to school won the RoughCut Booster worth KRW 2 million in support, while HEON Chul-nyung’s 206 Unearthed won the First Cut Lab Entry which gives the film an automatic entry to the EIDF’s First Cut Lab. Lastly, KIM Saebom’s Small Bird and Mr. Pig won the Furmo DT Award which gives the film submission support to international film festivals.

50 industry professionals including Chairman KIM Seung-su of the organizing committee, the jury members of the JEONJU Cinema Fund and RoughCut Navigating, and related project associates participated in the event after going through thorough disinfecting measures. With the awards ceremony, the 12th JEONJU Project Market’s 4-day long event came to a close. Festival Director LEE Joondong said, “As many independent filmmakers are going through an especially difficult time because of COVID-19, JEONJU IFF will take the lead in providing more support.”