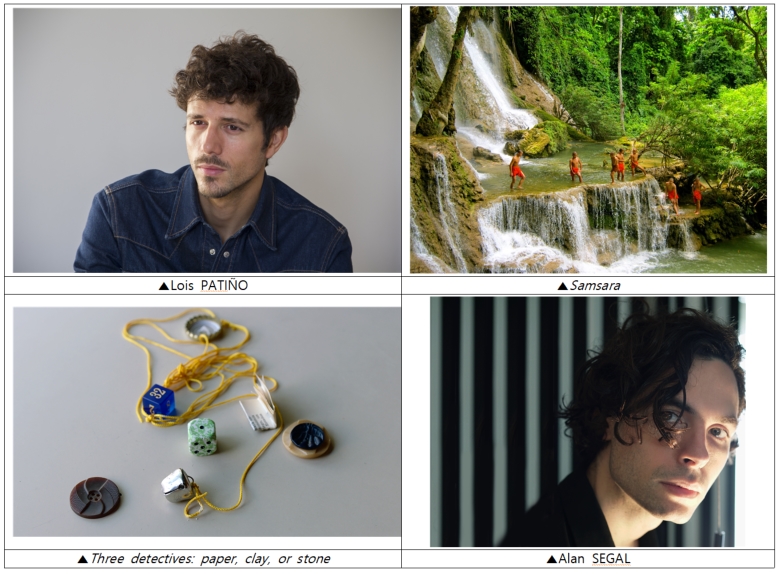 JEONJU Cinema Project 2021 of JEONJU IFF Announces 2 Additional Projects!
·Lois PATIÑO’s Samsara and Alan SEGAL’s Three detectives: paper, clay, or stone
·During the COVID-19 pandemic, JEONJU IFF will invest in independent and art film productions that can grow together with the festival!

JEONJU Cinema Project is one of JEONJU IFF’s major sections. In this section, the festival selects creative and challenging fictional and documentary feature projects and invests in the production, while the completed film is then introduced through the festival programming. Ever since its launch in 2014, the JEONJU Cinema Project introduced a total of 21 productions (15 Korean productions, 6 international productions) including Korean films such as PARK Jungbum’s Alive, SHIN Yeonshick’s The Avian Kind, KIM Heejeong’s Snow Paths, LEE Changjae’s OUR PRESIDENT, KIM Daehwan’s The First Lap, JANG Woo-jin’s Winter’s Night, KIM Jongkwan’s Shades of the Heart, and international titles such as György PÁLFI’s Free Fall, Benjamín NAISHTAT’s El Movimiento, Lukas VALENTA RINNER’s A Decent Woman, Camila José DONOSO’s Nona. If they soak me, I’ll burn them., Alejandro Fernández ALMENDRAS The Play, and Damien MANIVEL’s Isadora’s Children.

Firstly, Samsara is the newest title from PATIÑO who previously introduced 10 of his short and feature films at JEONJU IFF including Coast Of Death which was invited to the 15th edition in International Competition. Samsara will cinematize the distinct cultural differences between a young Buddhist monk at a temple in Luang Prabang, a young girl from Zanzibar, and a baby goat. Director Lois PATIÑO said, “Through their perspectives, I want us to take a look at the world and reality in a new light ”
when asked about his directional intent. He added, “I want to look for new cinematic languages while approaching the relationship between humans and nature and their spirituality.”

Three detectives: paper, clay, or stone is a debut feature by Argentinian rookie filmmaker Alan SEGAL. SEGAL is a film editor who also has a career in contemporary art. This film is an experimental fiction film that explores the emotional impact and repercussions language can have through three protagonists who work in the film industry. The producer on board is director Gastón SOLNICKI who met the audiences of JEONJU IFF with Kékszakállú which was introduced in the 18th Frontline, an avant-guard program, and Introduzione all’Oscuro, introduced as a part of 20th Newtro Jeonju, a special section.

Regarding the two additional selections to the JEONJU Cinema Project, Festival Director LEE Joondong said, “We paid attention to new challenging projects from rising directors who will grow with JEONJU IFF, and decided to make additional selections. Due to the COVID-19 pandemic, productions of independent and art films are becoming increasingly difficult. Through JEONJU Cinema Project, JEONJU IFF will expand and lead in supporting independent and art films.”