Institute Benjamenta, the first feature-length film of identical twins, Brothers Quay, who became a legend in the genre of animation film, gives us a clue to the world of the strange and the grotesque. It tempts audiences who are addicted to the Kafkaesque world. Elements like puzzling and distracted actions of the characters remind us of a marionettes´ action-a close observation soon reveals scenes like stop-motion animation-and the radical command of lighting and light shows the genius and imagination of Brothers Quay. Institute Benjamenta is a mysterious school for training butlers, and Jacob, who has come to the school to be a butler, tries to uncover the riddle of the school, which is like Pandora´s box. In doing so, he falls for beautiful the Benjamenta, who runs the institute. Adapting the original work by Robert Walser, a Swiss writer of the late nineteenth century who influenced the early Kafka, the film leads us into a labyrinth, which does not seem to have an end, like endless Chinese boxes. However, this labyrinth world contains a gloomy satire of reality not an admiration for the surrealistic world. In this sense, this film has something in common with Orson Welles´s "the Trial," an adaptation of Kafka´s novel. The film is an allegory of criticism and ridicule of the funny grotesque world, created by technologies, and of technology which the modern world forces us to accept. 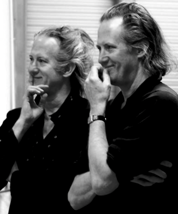 Quay Brothers
The Quay Brothers are identical twin directors born in 1947. They studied at the University of the Arts in Philadelphia and Royal College of Art in the UK. In 1980, they established Koninck Studios with Keith GRIFFITH and created various puppet animations. Fascinated with and influenced heavily by the works of Franz KAFKA, Bruno SHULZ, and Robert WALSER, they have created many films with a gloomy tone and manner. The Quay Brothers have built a dreamy, fantasy-like world while working in various fields, including documentaries on Igor STRAVINSKY and Leos JANÁČEK, films, advertisements, and interludes. In addition to the films from the 1980s such as ''The Cabinet of Jan Švankmajer, Prague’s Alchemist of Film'' (1984) and ''Street of Crocodiles'' (1986), they have created different works, including ''Institute Benjamenta, or This Dream People Call Human Life'' (1995), ''The Sandman'' (2000), ''In Absentia'' (2000), ''The Phantom Museum: Random Forays Into The Vaults of Sir Henry Wellcome´s Medical Collection'' (2002), ''Eurydice: She, So Beloved'' (2007), and ''Inventorium of Traces'' (2009). Their most recent film is ''The Doll´s Breath'' (2019).