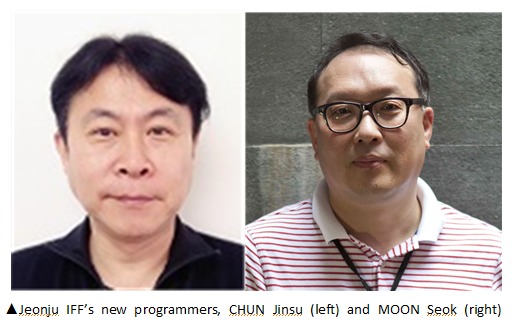 • Jeonju IFF gears up for the 21st Film Festival with its three programmers – Sung MOON, CHUN Jinsu, and MOON Seok

Programmer CHUN Jinsu majored in film at Dongguk University’s graduate program, then he finished his masters in film at University Paris 8 in France. After his studies, he worked at Jecheon International Music & Film Festival since 2006 until recently. In addition, he has experience with Jeonju IFF from when he worked as a master class programmer in 2005.

Programmer MOON Seok has worked as a film reporter, team leader, editor, and a member of the planning committee for Cine 21 since 2000. After working as an industry programmer at Bucheon International Fantastic Film Festival in 2017, he’s currently a member of the Korea Media Rating Board.

CHUN Jinsu and MOON Seok joins Sung MOON who was appointed as a programmer in February this year. Now that the programming team is equipped with three programmers, Jeonju IFF will finally gear up to prepare for the 21st Film Festival. Festival Director LEE Joondong explained, “We have decided to recruit CHUN Jinsu and MOON Seok as programmers and have trust in their programming ability as they have practical experiences at both domestic and international film festivals as well as in the film industry”. He added, “I expect Jeonju IFF’s festival identity will be strengthened thanks to the synergy created by Sung MOON, CHUN Jinsu, and MOON Seok.”

The 21st Jeonju IFF is currently gearing up for the festival by holding an open call for the international competition section, JCP: NEXT EDITION. The 21st Jeonju IFF will be held at Cinema Street for ten days from April 30 to May 9.